To most Westerners, Japanese samurai films show Japan after the Tokugawa Shogunate–from about 1600 and onward–replete with two-sword retainers with shaved pates, clean shaven for the most part, and living in a very regimented society with strict adherence to the rules set down by the Shogunate. But like my earlier post, “Murasaki’s World – Heian Japan,” Japan was different then, as were the warriors. Some examples: the warriors wore less sophisticated armor than in later periods, but still unmistakable Japanese. Men sported beards and full manes of hair. One film that captures some of this is Kobayashi’s 1964 classic film, Kwaidan. In the third segment, Hoichi the Earless. Though the battle is poetically filmed, the costumes and look speak for themselves. I include a clip from Kwaidan that is available on Vimeo. 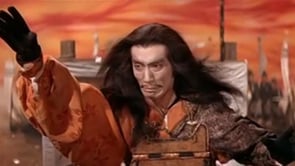